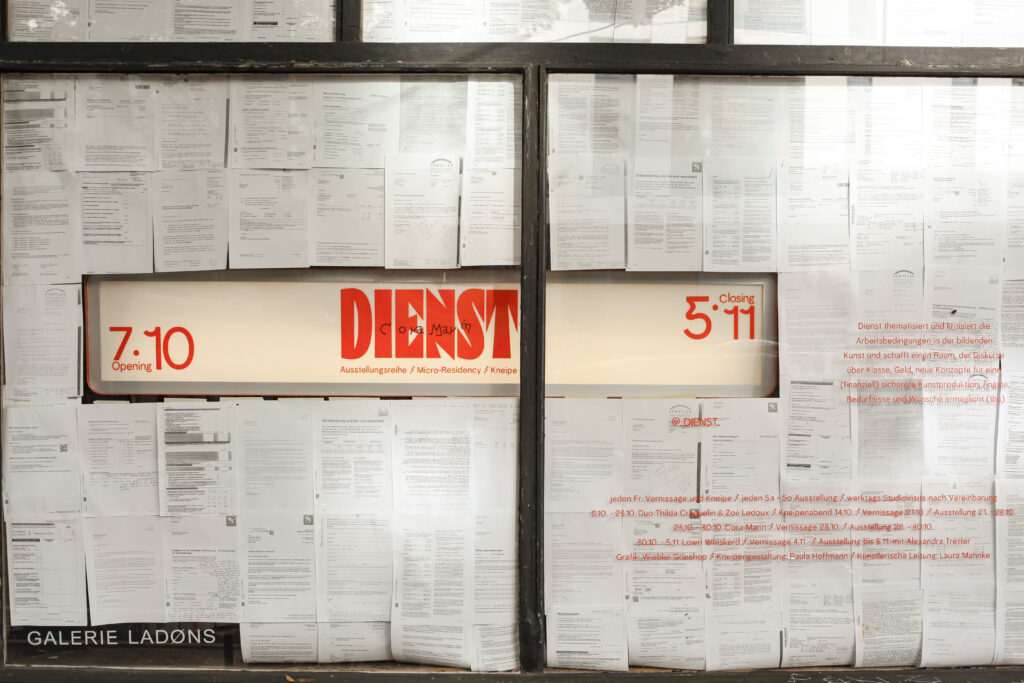 Duty was a temporary low-budget institution that took place at LADØNS Gallery from October 7 to November 5. It combined a studio visible through the shop window with a bar scenario in the back room and the exhibition series “Honey I can’t, I’m on duty”. The team was FLINTA* only and consisted of students or graduates of the HFBK, as well as graduates of European art schools. In the front room, visible from the street, 4 invited female artists spent a one-week micro-residency and received a basic income for it. On weekdays Monday through Friday between 9 am and 5 pm, the women artists produced artwork. Friday was opening day. The exhibition could be visited until Saturday evening or Sunday. With a pub scenario in the back room, the symbolic place of demarcated, precarious part-time jobs was directly integrated into the space of artistic production and simultaneously established as a meeting place. Duty addressed and criticized working conditions in the visual arts and wanted to create a cross-university space that facilitated discourses on class, money, new concepts for a (financially) more secure art production, fears, needs and desires. 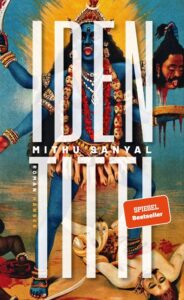 The cultural scientist, author and journalist Dr. Mithu M. Sanyal has published her debut novel Identitti (2021), which was shortlisted for the German Book Prize. Inspired by true events and current debates, she explores questions of ‘real’ belonging and cultural self-location and appropriation. A scandal is dealt with in a humorous and controversial way, in a combination of university and media discourse: Saraswati, a professor of postcolonial studies, is an icon of her field – until she is exposed as white. Her claim that she is a person of color is a racist masquerade for some, but for herself it is an expression of her transracial identity. While her dismissal is demanded at the university and the Twitter bubble is inflamed, Saraswati’s student Nivedita cannot give up her role model so easily. In personal conversations – often commented on by the Indian goddess Kali, who stands by Nivedita’s side – the two grapple with issues of both private and political dimensions. “For sponsoring the event, we would like to thank the UHH Equality Fund and the Gender & Diversity Center.” 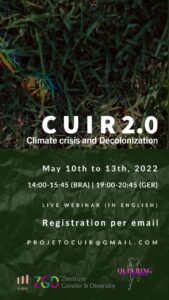 The CUIR Series is back! Together with Terceiro Andar and Queering Academia we invite you to a four-day series (10./13. Mai) of courses on decolonial and intersectional approaches to the climate crisis with guest speakers from Brazil and Germany. The subversive potential of decolonial and intersectional thinking leads us to rethink ourselves, political paradigms, and even world history. Challenging the western world order and its hegemonic narrative is a necessary step if we are to meet the next challenge facing the human species: the climate crisis. For this reason, Brazilian and German professors will engage in indirect dialogue to reconfigure the practical perspectives of ecological thinking to include decoloniality and intersectional perspectives of gender and class.
This course is intended for students interested in decolonialism, climate crisis, gender studies and queer theory, and especially Latin American perspectives. The meetings will take place virtually and synchronously through the Zoom platform and will be taught in English. Dates: 10/13. May. 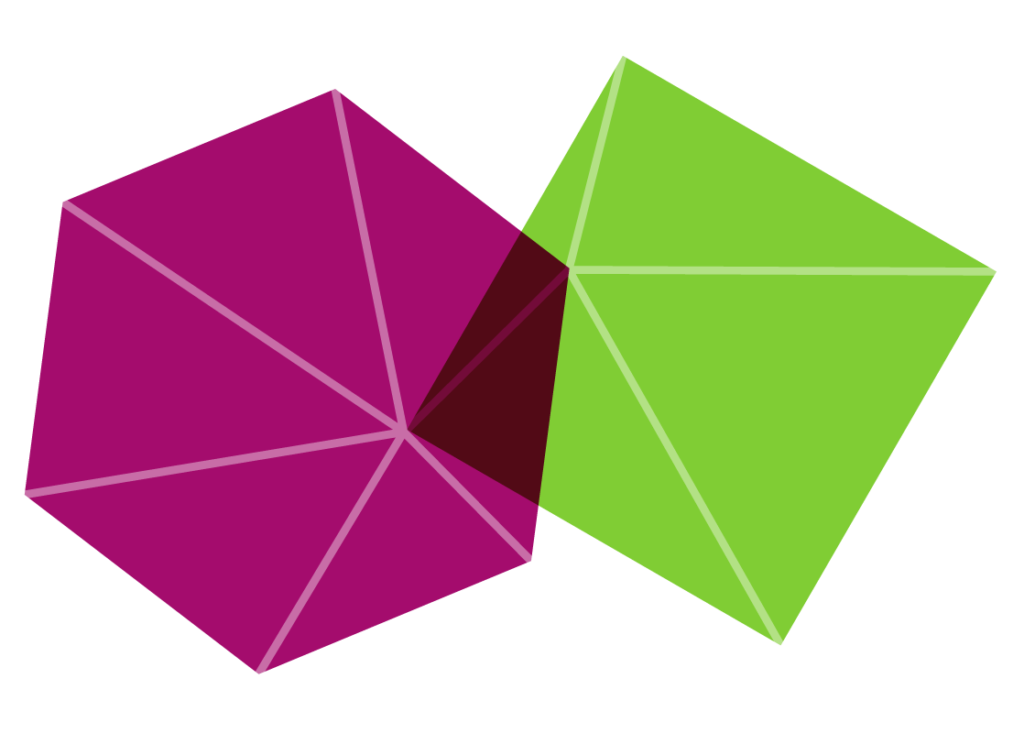 Sexuality is part of our general life, yet it is rarely talked about. The Workshop series „Multidisciplinary Introduction to Sexology“ aims to compensate for some of that and give students of all faculties and universities an introductory overview of the Sexual Sciences. Most of us did not really get a sexual education during our studies, so this workshop first presents itself as a sexual education course. The course is interdisciplinary and accessible.

The workshop series is organized and conceptualized by Laura Gimmel and Lorenzo Scarpitti: students of Psychology who see the need to integrate sexuality into the general curriculum. The goal is to create a safe space to deal with sexuality-related topics, in a non-judgmental way, sharing experiences and opinions, respecting the group view.

Here you can register and find more information.

"Rape and Revenge. Revenge-Cultures and sexualized violence in intermedial perspectives" (10./12.03.2022) 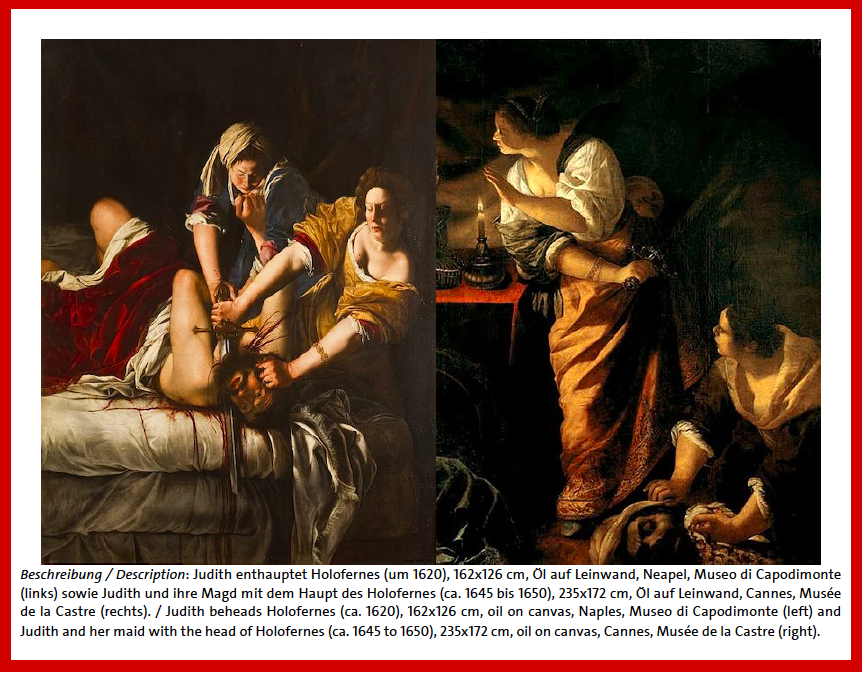 The topic “Rape & Revenge” was approached from different research perspectives in an intercultural and transdisciplinary way: Literary, Cultural and Film Studies, Gender Research, Historical Studies, Legal Studies, Ethnology, Applied Cultural Studies, Music and Art Studies, Philosophy. In addition, certain myths and topoi were also discussed in a cross-cultural perspective, comparing narratives and scenarios from Western cultural contexts with corresponding examples from African and Indian cultures and discourses. Last but not least, the workshop also offered the opportunity to shed light on the topic in an intermedial perspective by presenting examples from literature, film, the visual arts, and pop cultural artistic media such as the graphic novel. The workshop confirmed the assumption that the rape-revenge scenario is a narrative that can be historically traced back to antiquity and that is known in different cultures and handed down in different variations and media discourses. In this respect, the workshop dealt with a research-relevant topic that has not yet received attention in this form.

Note on the anthology: “A publication of the workshop’s contributions in an anthology has been announced for the fall of 2023.”

Conference: “Will you go out with me?” Inter*trans*nonbinary*queer perspectives on kinships and conflicts” (6–8 September 2021)

Will you go out with me? Who are you anyway, who am I, what are we to each other? Are we going forward or backward—and is our destination a date, a demo, an exhibition, a conference? How many are we anyway? Whose footsteps are we following in and how are we getting there?

Walking, shuffling, and rolling together creates connections: in my self-exploration, in the exchange with fellow movers, in the view beyond the horizon, and in the development of togetherness. Rapports and community, joyful relationships and enriching solidarities stand out just as much as separation and confrontation, exhausting tension, and productive dispute. With Will you go with me?, we address conflicts and kinships that arise from inter*, trans*, non-binary, and queer perspectives. Our aim is to create a space for exchanges and negotiations, concord and conflict, killjoys and jinxter. 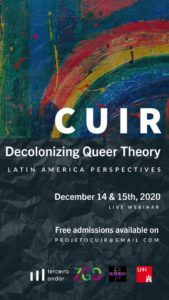 Click here to read the interview with the two organizers of this seminar, Renata Guadagnin (Terceiro Andar) and Ana Mendes (Queering Academia).

Together with Terceiro Andar and Queering Academia, we invite you to a two-day event (14–15 December) comprising courses on postcolonial approaches to queer theory with guest speakers from Latin America! The subversive potential of queer and postcolonial thinking allows us to challenge ourselves to think about new political possibilities and innovative ways of organizing the world. Queer concepts, however, have a strong (and restrictive) connection to countries with advanced capitalism and to European science. For this reason, professors from all over Latin America are challenging this hegemony with the “Cuir theory”, which proposes a reconfiguration of the analytical perspectives of decolonial thought.
This course is intended for students interested in decolonialism, gender studies, and queer theory, and especially in Latin American perspectives. The meetings will take place online and synchronously via Zoom and will be conducted in English. Dates: 14–15 December.

See here for the times and details of the various events.